A few things have come together this week which has resulted in me launching myself on an experiment to see how far I can go to living (perhaps more accurately working) without paper.
Firstly, the following exchange on Twitter:

I had been thinking about e-book readers, as I’d had a very brief chance to play with the new Sony e-reader a couple of weeks ago, I’ve recently installed an e-book app on my iPhone, and this week at work we had a couple of ‘New Technology’ workshops where we had some hands-on play time with various pieces of kit, including an iLiad e-book reader which the library bought last year.

So, I’ve decided to see how far I can use the iLiad to replace stuff I currently print out. I may try some other bits and pieces as well (e.g. RSS feeds using http://www.feedbooks.com/ – thanks again to psychemedia and Twitter for bringing this to my attention – actual e-books, and Newspapers formatted for the iLiad etc.)

So, starting today, for one month, I’m going to give it a go, and see how it works out – I’ll report around November 3rd.
For the moment, here are some first impressions of using the iLiad for this purpose:

I have to admit that the first thing that strikes me is that the iLiad hasn’t gone out of its way to make it easy to use. For a start, the main ‘manual’ doesn’t cover actually getting content from my PC onto the device – for that I have to install special (PC only) software, and read the manual that goes with that.

When I plugin the device, it allows me to ‘name’ the device – but only 11 characters long! It creates a folder structure with the main folder having the same name (so I now regret naming it ‘IC Library’ rather than ‘iLiad’ or similar, because in my folder structure this would have been more obvious). It then (for some reason) also gave an error saying it couldn’t create the folder – even though it actually did this successfully it seems. It also actually creates a whole load of folders – which is confusing to say the least: 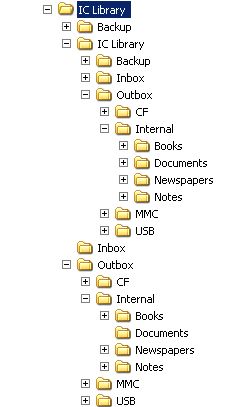 For some reason there is a nested structure that replicates the main one – this doesn’t seem to actually do anything though!

I also install the client software (Windows only), and this isn’t a brilliant design. Interestingly it does have a ‘print clipboard to iLiad’ function – I’ll come to this later.

The easiest format to work with for documents seems to be pdf, although the iLiad also supports a number of e-book formats of course. So, I need a PDF creator – I opt for the free CutePDF – and after installing a PS2PDF converter (available free from the same site), and the CutePDF software, I’m ready to go.

The way CutePDF works is it creates a ‘printer’ which when you print to it, creates a pdf instead. As @paulmiller pointed out on Twitter – with Macs you get this functionality in the system out of the box…

Coming back to that ‘print clipboard to iLiad’ function in the client software, you have to have a ‘pdf printer’ installed, so now I’m ready to go with CutePDF. I setup the client software to use this, and find that what actually happens is it prompts me to save the file – so this turns out to be no different to just using the CutePDF printer option!

I then decide to do a trial run – first I just use an open Excel doc and print it to PDF – CutePDF prompts me to save the PDF, and I do so in one of the iLiad Outboxes. Then I sync the iLiad with the PC. To see if this has been successful, I have to unplug the iLiad, and then navigate to the document menu – it isn’t there. I then try again, and print the pdf to a different Outbox folder – sync again – success!

However, you know what Excel files are like – this straddles 2 pages printed in portrait. So I do the print again, this time in landscape, and after some further problems getting the sync to work, I finally manage to get this onto the iLiad. However, on the iLiad, although it displays OK, it displays the landscape print in portrait – so very small! You can re-orient into landscape on the iLiad, which I do – finally, success and I’ve got the output I wanted in the first place.

Perhaps I started with too hard a test? But if this is going to work for me, I need to find this kind of quirk and work round it. Deleting docs from the iLiad works in an equally bizarre way – but I’m not going to go into the detail here – suffice to say, it isn’t intuitive (for me), and takes me about 10 minutes, and the manual to workout how to do this.

We’ll see how this all goes – and I’ll post further updates here. I want to limit this trial to 1 month so that others in the library can try the reader – so Imperial Library staff, if you are interested then let me/IT Team know…

6 thoughts on “A month of living paperlessly?”