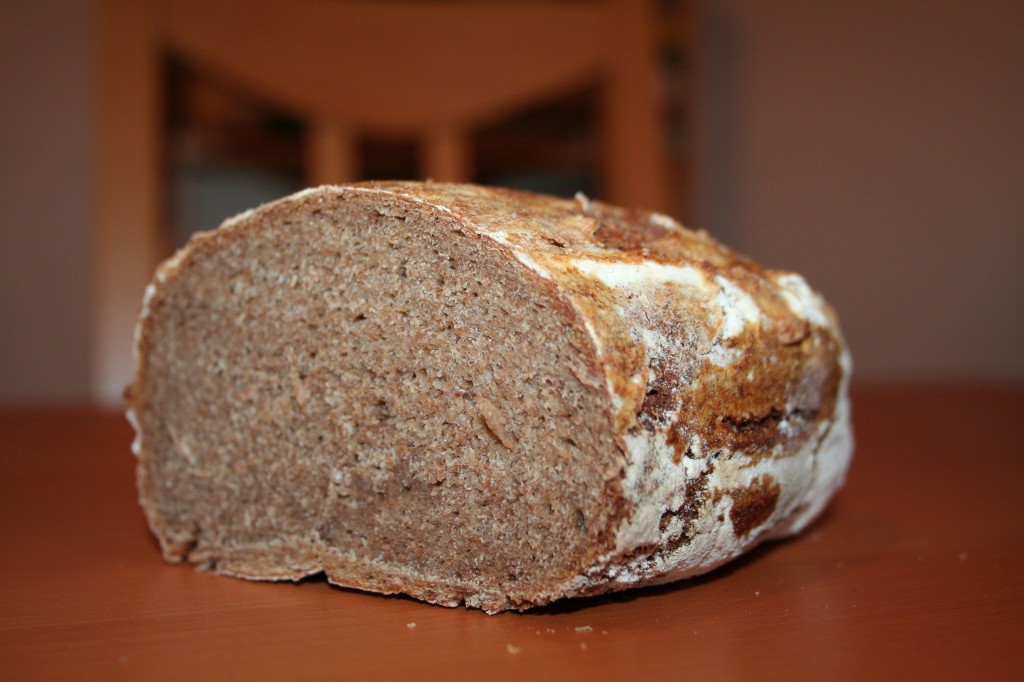 Admittedly, it doesn’t look very impressive – but this was the product of many hours of dedicated labour – and it tastes – well, like Rye Bread – so job done.

Two books have both enthused me about making bread over the last year. One I’ve already mentioned on this blog – Dough by Richard Bertinet. The other, and the one which this recipe comes from, is The Handmade Loaf by Dan Leppard. The recipes in The Handmade Loaf were collected by Dan from around Europe.
Dan Leppard’s approach to bread making is not for the impatient or the short of time. Many of them rely on a natural leaven – that is a ferment made from naturally occuring yeast. Initially the leaven takes several days to get going, but once you have a mixture that is fermenting you can keep it going by ‘feeding it’ – that is topping it up with flour and water.
Since this Rye Bread uses the natural leaven – this is where I should start. The instructions (and pictures) in the book are so good it seems both pointless, and unfair to the author, to repeat them here, but I’ll summarise quickly:
Mix 50g water, 2 tsp rye flour, 2 tsp strong white flour, 2 tsp currants or raisins, 2 tsp live low-fat yoghurt in a (atleast) 500ml jar, and leave at room temperature for 24 hours
Add a further 50g water, 2 tsp rye flour and 2 tsp strong white flour, stir well, and leave for 24 hours
Add 100g water, 4 tsp rye flour, 4 tsp strong white flour, stir in, and leave for 24 hours
Remove 3/4 of the mixture, add 100g water and stir well. Strain out the raisins/currents. Add 125g strong white flour and stir well – the leave for 24 hours
Add 100g water, stir well, add 125g strong white flour, stir well, leave for 24 hours
As you can see – this has already taken you 5 days – and you haven’t even started on the bread yet!
You should have a leaven that is now fermenting. To keep this going, every 24 hours you need to use, or otherwise dispose of, 3/4 of the leaven and top up with 100g water and 125g strong white flour (or in these proportions)
However, for the Rye Bread I needed a Rye Leaven instead of the white leaven that is described here. To make a Rye leaven you simply take the leave above and start feeding it with Rye flour and water rather than strong white flour and water. However with Rye flour you need a bit more water – I ended up using 125g Rye and 125g water for each refresh. I repeated this over a few days, refreshing roughly every 48 hours discarding 3/4 of the mixture and adding these proportions of water and rye flour – I think I refreshed like this 3 or 4 times.
With the Rye Leaven ready, you can start on the bread:
Boil water and measure out 240g – then let it cool to 90 degrees, and then whisk in 60g of rye flour – I have to admit I didn’t measure the temperature, I just boiled the water, poured out 240g into a bowl, and then whisked in the flour. The recipe suggests that adding the flour to water at different temperatures creates different textures to the final loaf.
Leave this mixture for at least an hour (I left it for just 1 hour), up to 24 hours
Now add 200g rye leaven to 50g water – and whisk in all but 1-2 tbsp of the rye and water mixture you made earlier (you use this little bit you have saved to brush the loaf later)
Add in 300g rye flour, 1 tsp salt and mix well
You’ll have a very wet dough
The recipe says to knead this ‘gently’ on an oiled surface – I have to say I found this very difficult. The dough was extremely wet, and despite the oil stuck to the surface quite quickly. From the description in the recipe it is not at all clear if you knead for just a few minutes, or until the dough firms up a bit and becomes easier to handle.
I was a bit less ‘gentle’ with the dough to try to get it to firm up, but in the end floured my hands liberally (although trying not to put more flour into the mixture, since in general the recipes Dan Lepard gives do result in quite wet doughs – and this is deliberate not a mistake), and shaped into a loaf.
Once you have a loaf, wrap in a (very very) well floured cloth, and leave to rise for 5 hours.
The recipe suggests the loaf will double in size – mine didn’t come close to this. Although you could tell that the dough had relaxed somewhat, it was hard to see if it had actually increased in size at all after 5 hours – maybe just a very little.
While the loaf is rising, pre-heat the over to 210 degrees. Don’t do what I did and accidentally switch the oven off, rather than switching it on 🙂
Turn the loaf onto a floured tray, and brush the top of the loaf with the leaven/flour/water mix from earlier, spray the loaf with water and bake in the over for 50 minutes, spraying again after 5 minutes.
The resulting loaf will be dense (I thought I’d baked a brick when my came out) – but will have that very distinct, and delicious, rye bread flavour. The bread goes well with a good hard cheese (something strong like Lincolnshire Poacher), smoked salmon, or just with some nice creamy butter. It may take 6 or so days to make, but it is worth it.