Bryn’s recent 5th birthday brought with it an extremely cool Dinosaur toy (available from Maplins in the UK). It consisted of a set of cleverly engineered cardboard cutouts which you fold and join to make a T-Rex, coupled with a motor, cogs, wires, battery box, switch and plastic stick, which all join together to make the cardboard T-Rex move and gnash it’s teeth when you’ve put it all together.

Bryn and I built it (although to be honest the cardboard folding/joining was pretty fiddly, and while he pushed the motor, battery box etc. in the base confidently, I had to do most of the construction of the cardboard model. The result was much much better than I really expected. The dinosaur moved (on the spot) and it’s teeth gnashed pretty effectively – enough for Bryn to play a game of putting his finger near it’s mouth and getting ‘bitten’. 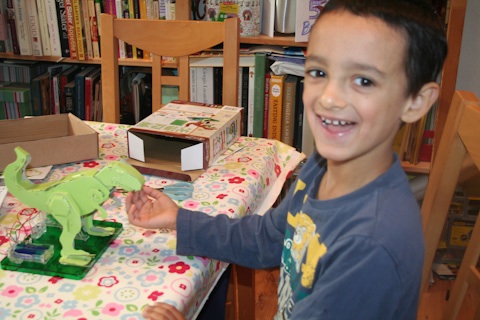 The next day, I had an idea that if the dinosaur’s motor could be driven off our arduino, we could wire the dinosaur up. I asked Bryn, if he’d like to do this as a project and he was keen, so the next day we sat down to do this.

The most recent project we’d done with the arduino had been using a light sensitive resistor to detect light levels and switch an LED on/off, so making the dinosaur light activated seemed an obvious way to go. I got the basic motor circuit design out (details atÂ http://www.oomlout.com/oom.php/products/ardx/circ-03) and started to try to work out how wire the photo-resistor.

While I was doing this, I was pretty impressed that Bryn just got on and wired up the motor circuit from the diagram pinned to the breadboard. While I had to put the more fiddly components in, all the wires Bryn did without prompting or help.

I was able to wire up the photo-resistor separately on the same breadboard (usingÂ http://www.oomlout.com/oom.php/products/ardx/circ-09) – including (at Bryn’s request) an LED also to be controlled by light levels. I have to admit it took me a little while to work out the wiring, and this led me to just write the code to run the circuit without really getting Bryn to help – which I was sorry about afterwards.

I’d got some concerns about whether the arduino board would drive the motor OK, as I hadn’t been able to establish what voltage/current was required for the motor. The circuit above uses a transistor to enable the arduino to drive a small toy motor, but I wasn’t sure if it would be enough for the dinosaurs motor (which usually runs off two AA batteries).

We covered the photo-resistor – and success. The dinosaur leapt (if slightly lethargically as the motor clearly not quite getting the power it really needed) to life. A dinosaur that comes to life when you switch the lights off! 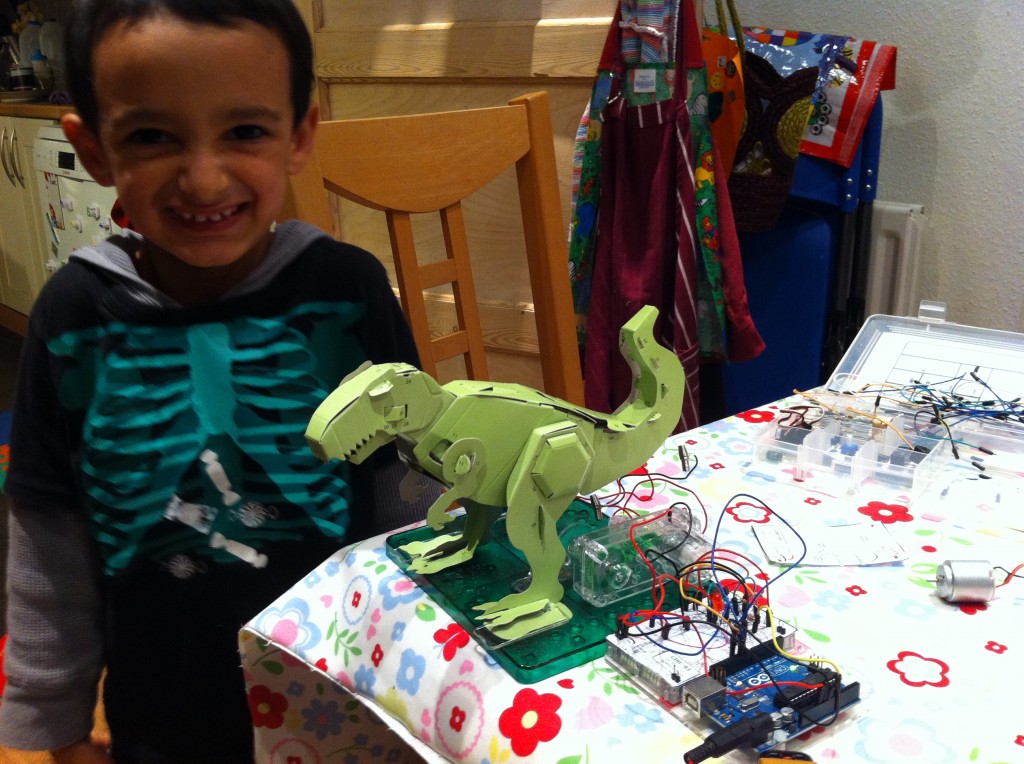 I guess the next step would be to get some LEDs on wires to push through the cardboard as eyes, and some sound effects …

Last night we got back from the fireworks display at Warwick Racecourse, and Damyanti suggested making some hot chocolate, having found a recipe in ‘delicious’ magazine which included double cream, vanilla paste and Frangelico liqueur – none of which we had, and the last of which we’d never heard of. Frangelico turned out to be a hazelnut liqueur.

So I improvised and came up with this alternative (amounts for one mug):

Adding the Nutella seemed to help mellow out the brandy, and make the drink just the thing for a chilly autumn night. 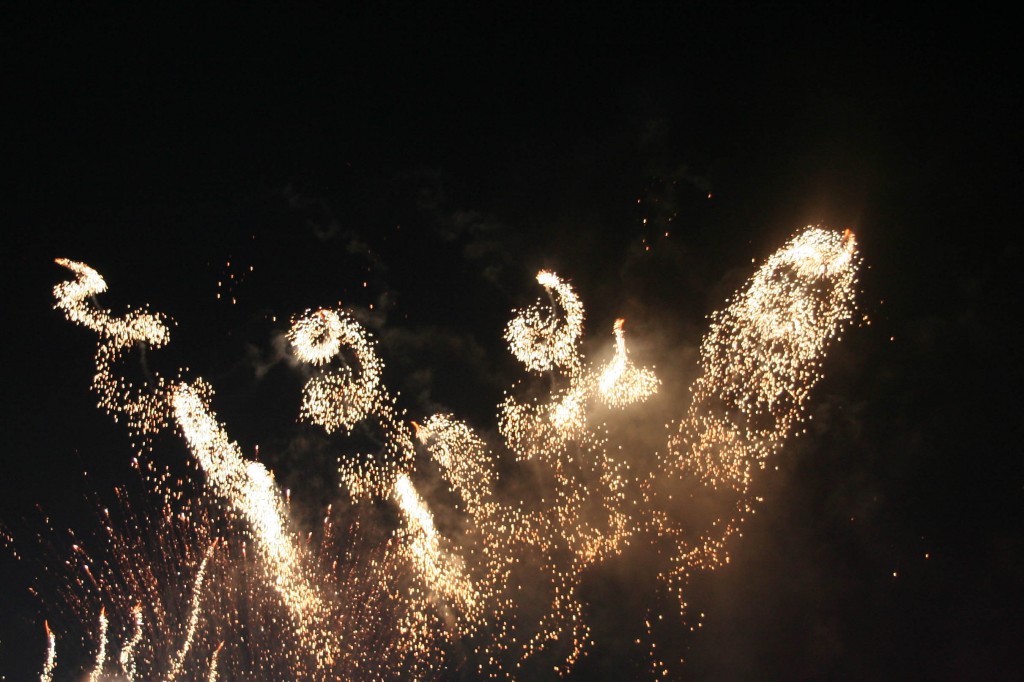 We love to have American style pancakes as a weekend breakfast treat. Until recently my favourite recipe was one I found on (no longer operational) Google Knol by Scott Jenson – luckily the recipe is preserved in several places online, including this site calledÂ Tastebook.

Because we don’t always have buttermilk in the house I’d occasionally played around with alternatives, and had a bit of success mixing yoghurt and milk – but I found if I got the proportions wrong in this mix, the flavour was a bit off. Then one day I had some left over sour cream, and used that, mixed with milk, in place of buttermilk. The result was the tastiest and fluffiest pancakes I’ve made:

Mix the wets and drys separately, then mix them together and let them rest for few minutes for the raising agents to start working. The resulting batter should be a bit lumpy. How thick you make the batter is up to you – if you make it on the thicker side you’ll get thicker pancakes that will need to cook a little slower to cook all the way through in the pan.