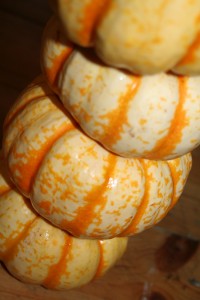 This is a recipe that we improvised at home a few weeks ago – but unfortunately we haven’t taken a picture of it either time. We tend to eat this over two nights, so I guess it would serve 4 at one sitting – although perhaps accompanied by some bread?

That’s it – it sounds complicated but to be honest it doesn’t feel like a big hassle once the squash is in the oven – it gives you time to do everything else. We really like it, and recommend it!