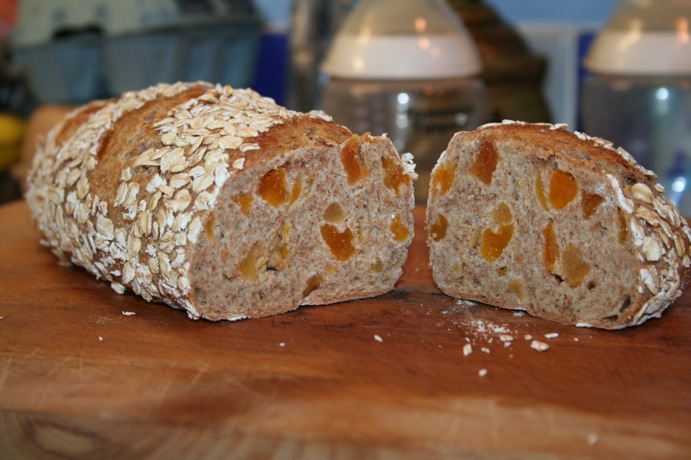 This recipe is from Dough by Richard Bertinet. I came across this book in Richmond library while actually looking for a Chinese cookery book, and thought it looked interesting. After a few weeks, several loaves, and some overdue fines, I decided I needed to invest in my own copy.

Richard Bertinet is a Frenchman living in the UK (around Bath somewhere), and he has some definite views on the way you should bake bread. He dispenses with the traditional ‘kneading’ process, and replaces it with a method where you stretch and fold the bread. For some of the breads I think the technique makes quite a big difference, giving a more open texture. However in this case, the bread has quite a close texture anyway, so I think normal kneading will be fine.

If you are interested in trying a different approach, I’d really recommend the book and it includes a DVD showing how to carry out the technique. If you are really  interested you can book yourself on one of Richard’s cookery courses!

Add the salt, and mix through (do this separately to the yeast, as a concentration of salt can kill the yeast). Then add the water, and mix. You’ll get a slightly wet dough – it will be sticky, but should be firm enough to knead, and as you knead the stickiness will go.

When the dough feels less sticky, and firmer, add the chopped apricots to the dough – and keep on kneading to spread them evenly throughout the dough. I usually flatten the dough, put the apricots on top, then fold the dough over and start kneading again. I have to admit I find the dough slighly more difficult to handle once its got bits in, and find the bits (in this case apricot of course) fall out and shoot across the work surface (or onto the floor).

Once you’ve got the apricots pieces mixed in with the dough, form the dough into a ball by flattening the dough just a very little, and then fold in the edges to the middle. Turn the ball over, so you’ve got a smooth side on top. Put the ball of dough in a lightly floured bowl (big enough for the dough to double in size) and cover the bowl with a damp tea towel.

You need to rest this in a reasonably warm place for about an hour – until the dough has doubled in size. It really shouldn’t take more than 90 minutes at the very most. If your kitchen is warm this is an ideal place to put it.

Once the dough has doubled in size, turn it out and divide it into two. Form each half into a ball, and rest on the side (you may want to flour the side to stop it sticking) – covered with the damp tea towel – just for 10 minutes.

You now want to form each of the balls into a loaf. Turn the ball upside down, so the smooth side is down on the work surface. Flatten it out into a slight oval. Along one long side – fold the edges into the middle. Then do the same with the other long side. You should have something vaguely loaf shaped by now. Fold it in half lengthways, and turn it over so the ‘seam’ you’ve just made is on the bottom. Hopefully this will look pretty much like a loaf! (the shaping is meant to help the rising – but to be honest you can probably get away with any shape!)

Brush the top and sides of the loaves with water, spread the oats out on a plate, or on the side, and roll the loaves in the oats until they are covered (not on the bottom).

Put the loaves on a tea towel you have generously dusted with flour, pleating the tea towel slightly between the loaves so they don’t touch as they rise. Make three or four cuts across each loaf with a sharp knife (again, this helps the loaves rise). Cover the loaves (I usually just fold over the edges of the floured tea towel they are resting on), and leave to rise for another hour. This is often a good point to put the oven on – you want to pre-heat it to 250 Celsius. If you have a pizza stone, you can use this to bake the bread on – put this in oven now so it has plenty of time to heat up.

After an hour, put the loaves in the oven – either on a baking sheet (don’t worry about handling the loaves at this stage – they should be quite robust), or on a pizza stone that has been in the oven as it was pre-heated. I also pour half a glass of water into a tray in the bottom of the oven to get some steam in the oven – once again, to help with the rising of the loaf – but you can omit this if you want. Immediately turn the oven down to 220 degrees, and bake for 25 minutes.

Take the loaves out of the oven – check they are cooked by tapping the bottom of the loaf with your fingers – they should sound hollow – if not, put them back for another 5 minutes or so.

Cool the bread on a cooling rack. 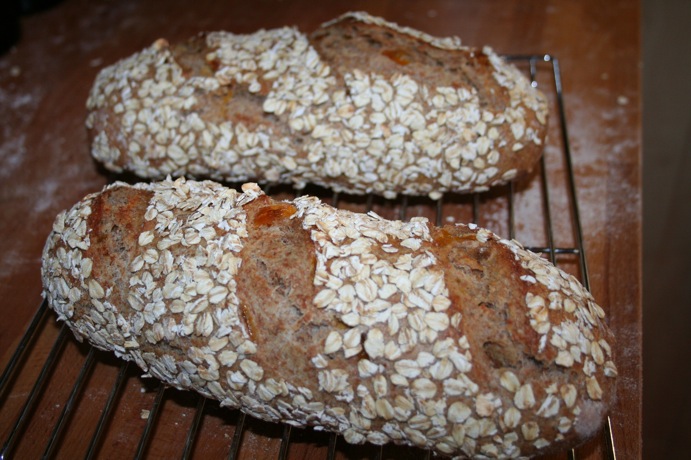