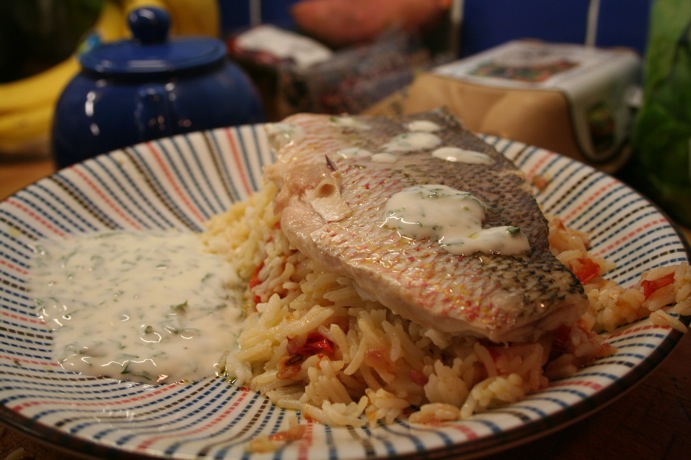 This is a variation on a Jamie Oliver recipe – I have to admit that I think the original is better than this variation (it’s in Jamie’s Dinners, called Omega 3 and Couscous if you are interested) – but we were missing some of the key ingredients, including the Couscous, so this is what we got instead (some of the quantities I’m guessing about)

You want a pan that is going to fit everything in it – we use a deepish wide frying pan – ideally with a lid, although you could use foil to cover the pan as well.

Chop the onion finely, and cook on a low heat in some good olive oil, with the fennel seeds, bay leaf and chilli in a covered pan (you want the onion to get quite soft – it will take 10 minutes or so)
Chop the tomatoes into halves or quarters (depending on the size – you don’t want the pieces to be too small), and chop the anchovy as well, and add them both to the onion and herbs/spices. Season the mixture to taste.

Spread the tomato/onion mixture over the base of the pan, then spread the rice over the top, covering the tomato/onion completely. Lay the fish fillets, skin side up, on top of the rice, and cover the pan. Cook on a low heat until the fish is cooked through. You may well want to add a drop of water during the cooking – I usually end up adding half a cup or so. How long it takes to cook will depend on the size of the fillets – 10-15 minutes as a guide.

What you will hopefully get is a thick, spicy, jammy, tomato mixture at the bottom of the pan which you can mix through the rice.

Serve with a yoghurt dressing – yoghurt, lemon juice, salt, pepper, mint, coriander if you like.

I would recommend the original recipe – couscous takes the flavours of the tomato mixture better, and uses fresh fennel to give a bit of an aniseed edge.