This is another bread recipe from Dough by Richard Bertinet. It starts with his basic olive oil dough which is:

Make up the dough and knead it well (it will be quite sticky at first, but should get firmer as you knead). Rest the dough for an hour in a covered bowl. Oil a baking sheet, and turn the rested dough out onto the sheet. Spread out the dough on the sheet by pushing it with your fingers (don’t roll it out or stretch it). Drizzle some olive oil over the top and spread it across the dough (easiest to do this just with your hands)

Cover the dough to rest for 45 minutes. I find that putting it in a plastic bag is the easiest thing, and doesn’t stick (the first time I made it, I used a tea towel, and ended up scraping half the dough off the towel). After it has rested use your finger tips to make dimples across the whole dough – just push your fingers into the dough. Then cover again and leave for a further 30 minutes.

Finally sprinkle some good quality sea salt (e.g Maldon Sea Salt) over the top (you want salt flakes, rather than granules), and bake in the over at 220 degrees C for 25-30 minutes. The original recipe adds rosemary at the same time as the salt, but we’ve been out of rosemary every time I’ve baked it so we haven’t tried it yet.

After it comes out of the oven, but while it is still warm, brush with more olive oil.

We absolutely love this bread – probably a bit too much. Delicious dipped in more olive oil and balsamic vinegar.

We’ve tried the same recipe as a pizza base – 500g flour made 3 medium sized bases when stretch out more thinly. They were still pretty thick, but good flavour. 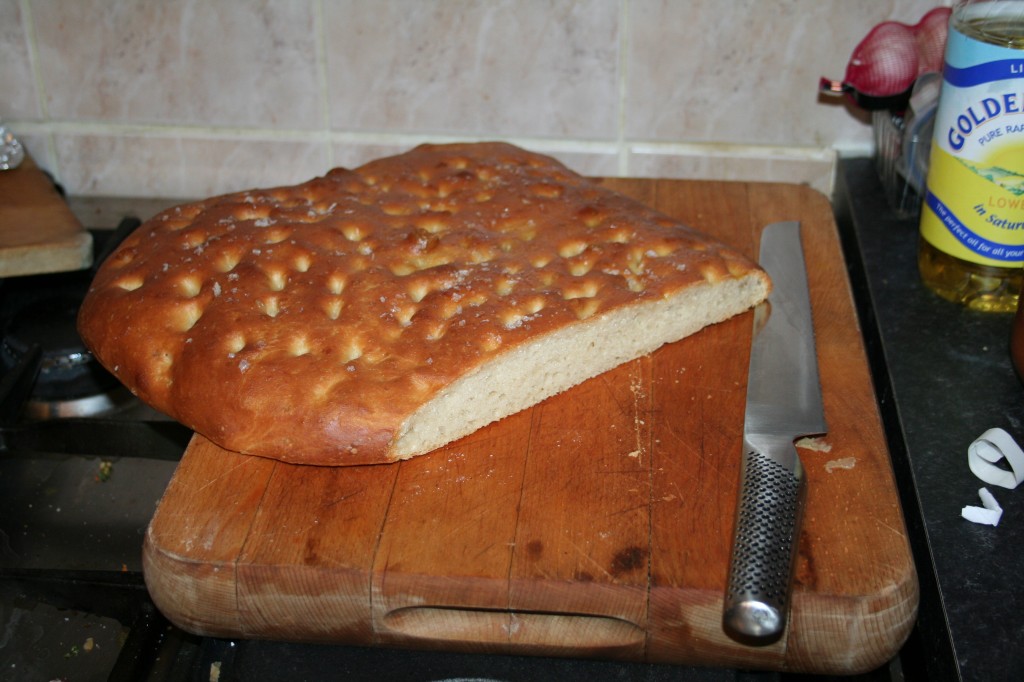 Picture of a loaf of focaccia