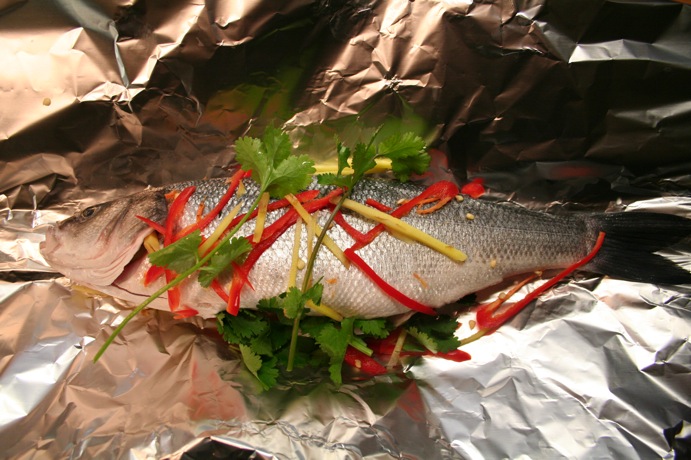 Appetite by Nigel Slater
is one of my favourite cookery books. I have to admit that if I’m
cooking from a recipe, I generally like to follow it – despite my
wife’s best attempts to get me to relax, and treat the recipe as a
starting point rather than a set of rules that have to be followed.
‘Appetite’ doesn’t generally have recipes, but rather guidelines and
suggestions – and it was the book that finally got me to engage in wha
I was cooking, taste as I went along, and gave me some confidence in my
ability to produce something edible without strict instructions.

In
the same vein the quantities here are vague, and can, and should, be
varied to taste, and depending on how many you are serving.

Scale and gut the sea bass – or buy it that way of course – I take a
slightly peverse pleasure in doing this myself when I have the time.
Put the fish on a piece of foil – big enough to form an envelope around
the fish.

Bash
the lemon grass a bit – e.g. with a rolling pin – so it splits a little
(don’t overdo it – you don’t want it in pieces), and stuff it in the
cavity in the fish.

Thinly slice the chilli and ginger into
strips, and scatter around the fish, add some coriander (stalks and
leaves) – in the cavity and around. Finally add salt, and a small glass
of rice wine (making sure you’ve turned the foil up so it stays in the
foil)

Make an envelope out of the foil, sealing the fish inside.
You can leave this for an hour or two, or cook immediately if you want.

To
cook, put the oven on about 200 C, I recommend putting the foil parcel
is a shallow tray or dish just in case any liquid leaks out. For a
small sea bass it could take as little as 15 minutes – just check it
regularly after this – you want it so the flesh pulls away from the
bone easily.

This can be served with plain rice, but Nigel recommends (and I concur) a dipping sauce with it:

Put equal amounts (by volume) of sugar and rice wine in a pan (for
2-3 people, 6 tablespoons of each). Bring this to the boil, and simmer
until it starts to get a bit syrupy – maybe 5 minutes or so. Finely
slice a chilli (again for 2-3 people 1 will be fine), and add to the
sauce, along with a tablespoon of dark soy (based on the same
quantities) and juice of half a lemon or lime (depends on the juiciness
and size – basically you don’t want to water down the sauce too much,
but just add a bit of zing) 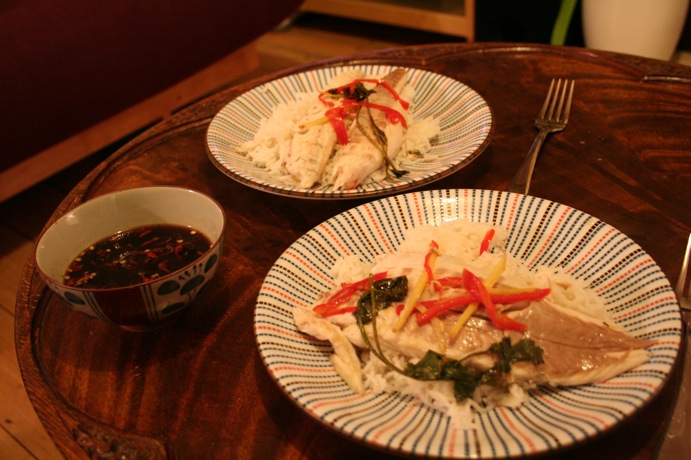